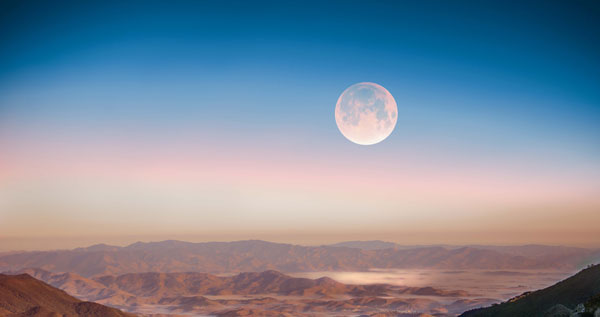 Salutations to Her who is the Mother of the universe

Salutations to Her whose forehead shines, arching like the crescent moon of the eighth lunar day

Salutations to Her who is Herself all the phases of the Moon. 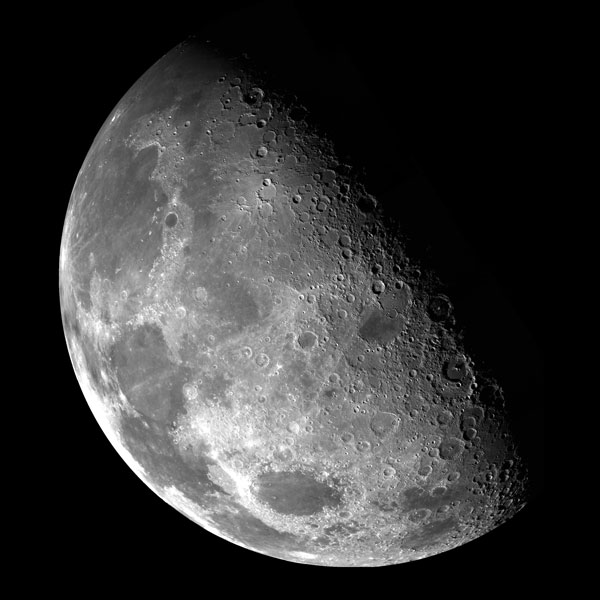 “This is a beautiful and wondrous sight to behold the body of the moon.”

Galileo Galilee :1610 First views of the moon via telescope

Queen of the Cosmos

The Moon is the Queen, the Mother, the element of water, representing qualities of sattva, the senses and emotions. In the Sanskrit language the Moon is Candra (pronounced Chandra) which literally means, "luminous" or “Moon" Other names include Indu (bright drop), atrisuta (son of Atri, one of the seven great sages), tārādhipa (lord of stars) and niśākara (the night maker). The Moon is celebrated as a deity, an expression of rebirth, transience and a celestial being.

The Jyotiṣa tradition regards the luminaries of the Sun and the Moon as male in gender. However, the Moon is still worshipped as the Devi, a goddess of celestial light. The Moon moves in monthly rhythms through cycles of transformation embodying the feminine śakti (creative power) in the flow of life. Water, soma and the inner nectar of pure awareness are the gifts of the Devi.

The dancing Moon is a spectacle of ever changing light moving across the heavens in a transformative dance, continually casting the reflection of the solar light upon the earth. The Jyotiṣa tradition asserts that at the moment of our birth this solar light imprints our karmas across the mystery of space and time. And through this divine light reflected upon the Moon, the very nature of our emotions and minds are configured and constellated for the brief period of our embodied life. And then, once having taken form, we look up to the Moon, as have generations before us, entranced by its timeless beauty.

Due to the Moon’s proximity to earth, its beautiful forms have enchanted human civilization for millennia. In every culture of the world there are myths and stories celebrating the Moon’s ever-changing form and color.

Curse and Redemption: a Lunar Tale

One of earliest known Vedic astronomical texts, the Vedāṅga Jyotiṣa, describes the Moon and its passage through the nakṣatras, the twenty-seven celestial lunar mansions marking a lunar month. This journey of the Moon through the night sky was observed closely by the ancient sky watchers and they cognized the expressions of divine intelligence through these fixed stars which became so central to Jyotiṣa teachings.

The waxing and waning cycle of the Moon is immortalized in a beautiful teaching tale. There are several accounts of this story and a good rendering is that King Soma, (the Moon), married twenty-seven of the daughters of Dakṣa, a progenitor of the gods. He promised to treat each of the sisters equally by visiting each one at her lunar mansion once a month. However due to the luminous beauty and sensuality of Rohinī, she became the most beloved of his many wives. Soma was so distracted by her; he was unable to spend equal time with the twenty-six other daughters.

The neglected daughters were outraged and complained to their father who cursed his son-in-law with a degenerative disease which caused him to wane in light, day by day. Alarmed by the world being deprived of the Moon’s light so vital to the life and balance of nature, the Solar deities, the Ādityas, convinced Dakṣa that he must reverse the curse. But Dakṣa agreed only to a modification whereby the Moon must wane and die each month only to be resurrected and grow day by day to its full glory. The Aitareya Brāhmaṇa states that “at the time of the new Moon, the Moon is absorbed by the Sun, (significator for healing), and from the Sun the Moon is reborn.”

The Moon and the Pancāñga

One of the crowning achievements of observation of the cycles of the luminaries was the ability to order human activity accordingly through the device of calendars. Though there are cultural variations, calendars take into account lengths and days, seasons and often indicate auspicious configurations coinciding with community celebrations.

The Indian calendar is called the Pancāñga (five limbs). Its name reflects five main calculations which represent the cycles of the Sun and Moon and their relationship to each other. 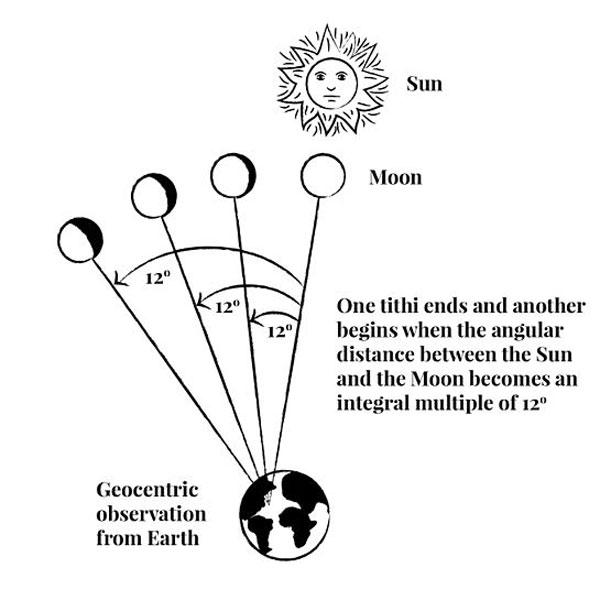 The story of the waxing and waning Moon can be thought of as a teaching tale describing the tithis, the third limb of the Pancāñga. Each day the Moon travels twelve degrees in longitude from the sun across the heavens, is one lunar day. The lunar month is divided into thirty tithis which vary in length from from nineteen to twenty-six hours due to the elliptical nature of the Moon’s orbit around the earth. In a lunar sidereal month, it takes approximately twenty seven days for the Moon returns to the same point under the stars.

The thirty lunar days are organized into two cycles of fifteen - fifteen tithis from the new Moon to the full Moon known as the śukla pakṣa (the bright half or wing) and fifteen from the full Moon to the new Moon known as the kṛṣṇa pakṣa (the dark half or wing). The fifteenth day of the waxing cycle is the full, or purṇimā Moon. The fifteenth day of the waning cycle of the new moon is the amāvāsyā Moon.

The names of the tithis in between are simply the Sanskrit ordinal numbers for first, second, third up to fourteen with the addition of whether it is in the bright half or the dark half. Thus the fourth tithi after amāvāsyā would be caturthī (fourth tithi) śukla pakṣa (in the bright half).

Muhurta (setting an auspicious time for undertaking an endeavor) is a key part of Jyotiṣa and the tithis are one of the major components for determining appropriate times for the varieties of activities and rituals keyed to the welfare and development of the individual and the community.

In the following table note that each tithi has a graha (planet) associated with it and a devata (deity). The tradition prescribes rituals and mantras appropriate to the presiding deity of the tithi when an important activity is started a particular day.

Nakṣatras are a key limb of the Pancāñga. The major role they play in Jyotiṣa cannot be overemphasized. Even the months are named with reference to them.

However, as with all calendrical references, regional variations abound. Large portions of India count their months from the new Moon and the same can be said for starting with the full Moon.

The following table serves as a general reference and gives the Gregorian calendar equivalent as well:

A detailed study of the Pancāñga is richly rewarding as every limb plays a major role in both calendrical and chart interpretation considerations. Hopefully this short introduction serves as a springboard for further inquiry.

The texts tell us that the Moon is changeable and fickle. These kinds of statements derive directly from watching the Moon changing night after night. But it is not just the waxing and waning. It is also its color, size and brightness. What accounts for all this variety? 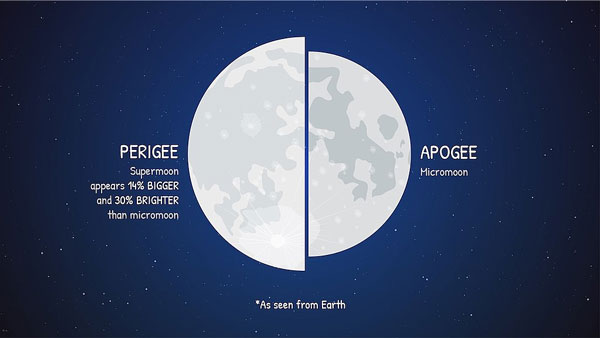 Often these observable features of the Moon are due to astronomical and atmospheric phenomena. Due to the elliptical orbit of the Moon with one side closer to the earth, the distance between the Earth and Moon varies throughout the month and year. The closest point to earth is called the perigee, often referred to as a supermoon. The furthest point from the earth, the apogee or micromoon. A supermoon looks 30% brighter than a micromoon and 17% brighter than an average full Moon. Due to the curvature of the Earth and particles in the atmosphere contributing to refracted light on the horizon, the best time to enjoy a full Moon is just after moonrise when the Moon will appear larger than it actually is. This optical illusion is called the Moon illusion.

During 2014-15 four successive full lunar eclipses were named blood Moons by an apocalyptic American Christian pastor, who foretold this signified Biblical end times. This was the first reference to a “blood Moon” though certainly not its first appearance in the celestial heavens.

This blood Moon occurs only during a total lunar eclipse when the only light that reaches the Moon’s surface is reflected light from the earth, which casts a copper glow across the moon’s surface.

The Moon’s form is enhanced by earthshine, which is visible earthlight reflected from the Moon’s night side. Earthshine is most readily visible from a few nights before until a few nights after a new Moon (waxing or waning) crescent phase. The thinnest Moon crescents display the brightest earthshine. The Northern hemisphere spring is the best time to view this phenomenon at its brightest. This is due to the phase reciprocity of the earth and the moon. When the Moon appears thinnest from earth, Earth would look full from the Moon. Conversely, Earth would appear to be unlit, or in its new phase, if viewed from the Moon during what we would see as its full phase.

The Moon with its dancing light and form blesses us with her beauty and Light. For millennia, the Moon has entranced us as the nearest celestial planet, moving through continual cycles of waxing and waning Light. The Jyotiṣa tradition celebrates the Candra Deva, as a deity of Light deeply embedded in our lives, expressing so beautifully the luminosity and emotional intelligence of the Divine.

Let me meditate on the son of milk,
Oh, essence of nectar, give me higher intellect,
And let Moon God illuminate my mind

In 2015 Michael spent some weeks in retreat during the Karthigai Deepam, the Festival of Light, which occurs with the November full moon in Southern India. This marked a deeper alignment to the Vedic tradition as a student of Jyotish. Michael is a new student of Jyotish seeking to understand the great beauty and mystery of Jyotish, encoded as the language and science of Light. He continues his study with Penny Farrow and sangha. Michael works as a Mental Health Social Worker managing a community mental health team out of Lithgow Hospital, the western slopes of the Blue Mountains in NSW, Australia.