The Eternal Truth of The Whole and the Part

As the sunset led to pitch darkness, slowly the razzle-dazzle of the Moon, the stars and other shiny objects in the night sky captivated the imagination of people in the ancient times. It was as if the bejeweled dancers were performing dances that reflected the ups and downs of their own lives. The intimate relationship with the cosmos flourished and their observations became the very basis of Jyotiṣa.

This linkage between the vast cosmos and the individual life reverberates in a profound revelation well known in the Vedic tradition and applied in many contexts: 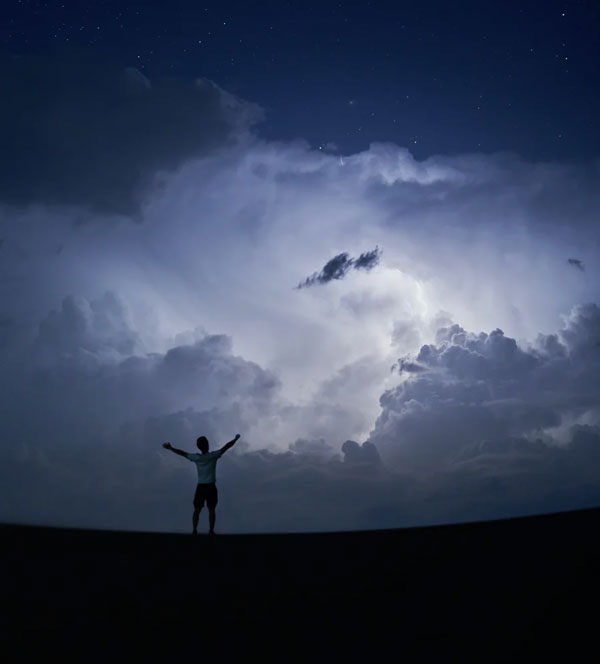 A reasonable translation of this verse is “as in the part so in the whole”. In the context of Jyotiṣa, a very appropriate rendering would be “as in the whole (the cosmos), so in the part (a human being). This revered cognition implies that at any particular coordinate of time and space, the show put together by the macrocosmic laws of nature as enacted by the cosmic markers or grahas is consistent with the story of a microcosmic being that is born! An excellent illustration of this concept is a hologram. If it is broken, every piece still reveals the same whole.

A Jyotiṣi relates to the cosmic patterns as a language telling the story of a significant moment of time. It could be the moment of birth or the moment when an important praśna (question) is being asked. The story is about the karmic conditioning that is consistent from the materialized outside level, all the way down to the physiological, emotional and intellectual level. All the different layers will represent the value of the interaction of those laws of nature at that moment of time and space.

What does Jyotiṣa Teach Us about How to Live Our Lives?

The vision of Jyotiṣa is conveyed by the great sage Parāśara in the beginning of one of the root texts of Jyotiṣa, Brihat Pārāśara Horā Śāstra. Maitreya, a highly qualified student, respectfully asks Parāśara to instruct him in this noble study. Parāśara responds as follows:

O Learned one, excellent is the question asked by you for promoting the welfare of the world. Now I again (bow to) the Supreme Absolute and its power Goddess Bharati. 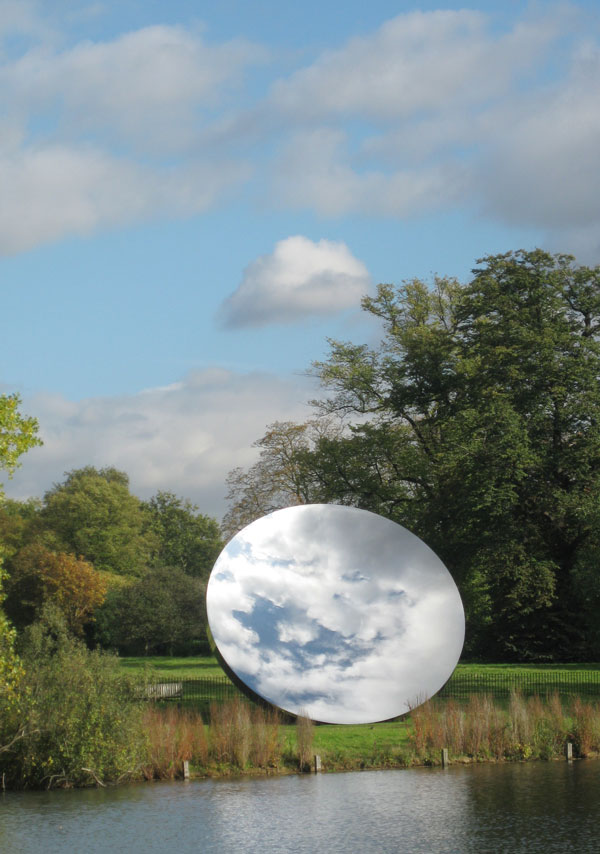 Why does Parāśara say that the study of Jyotiṣa promotes the welfare of the world? As with all great teachers in the Vedic tradition, Parāśara goes right to the heart of the matter. These first words spoken to Maitreya highlight that Jyotiṣa is not just about predicting future events in a person’s life. It is a mirror which allows a glimpse into the mysterious workings of our deep-rooted conditioning. With proper guidance, these revelations can ultimately help people (piṇḍāṇḍa) blossom into much better versions of themselves by aligning with the larger reality in which they find themselves (brahmāṇḍa) in a dharmic (constructive) way.

The consistent theme in this first Cosmic Kaleidoscope Journal is that Jyotiṣa starts with pratyakṣa (direct observation). The story of an individual’s life as revealed by the cosmic patterns and deciphered by a Jyotiṣi is an unfoldment of the results of our actions in the past, including past lives. The fundamental law of karma, “as you sow, so shall you reap”, is the common thread that connects us together.

Across the world, societies may have different norms and cultures, but the law of karma is applicable to all just like Newton’s law of gravitation. Whether you are a wealthy elite or a poverty-stricken refugee, there is no escape from the laws of karma. Hence, performing rightful karma a is a powerful instrument in propelling us ahead on the spiritual path.

Karmaphala is translated as the results of our actions or the fruits of seeds we sow. This is not in our control nor should this be the driver of our actions. But, how is it possible to perform actions without being driven by results? In the wise words of Swami Dayananda Saraswati, the results are not in our control but without having a particular result in mind, there would be little reason to perform action. 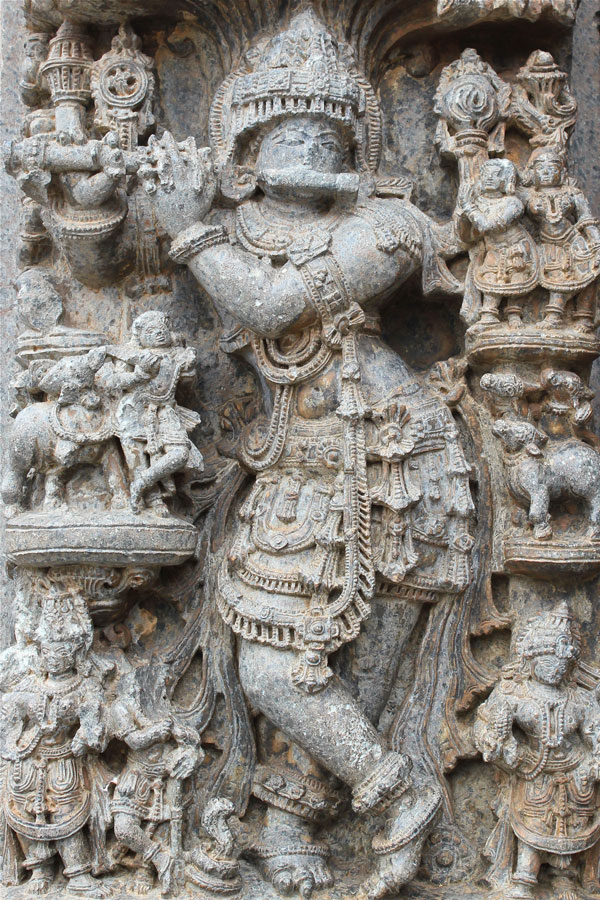 For example, Lord Kṛṣṇa would not have spoken the Bhagavad Gītā if he didn’t have the removal of Arjuna’s ignorance as an end in view. Action must naturally be driven by the results we have in mind, but our action should not transgress dharma and we must be aware that the results may not match our expectations. Performing our rightful actions even in the face of unpleasant results is a powerful way to cultivate the character of a person (piṇḍāṇḍa) who will be that much more likely to align with the greater good (brahmāṇḍa)

To begin this shifting of attitude, in the Gītā Lord Kṛṣṇa says:

Your choice is in action, never in the results thereof. Do not think you are the author of the result of action. Let your attachment not be to inaction.

But karma is an ongoing process. Just as, our past actions have led to present circumstances, similarly our present actions will contribute to future circumstances in our own lives (piṇḍāṇḍa) and the effect of the widening ripples of these actions in a more universal way (brahmāṇḍa). However, we are not mere puppets in the hands of our destiny. We do have the power of exerting our free will through our present actions. We can tweak our story the best way possible so that it does not become a cacophony of noises but rather turns into a melodious song.

Just as the macrocosmic patterns help unravel the microcosmic mysterious karma pattern of our life, we as humans can begin at the subtlest level of conscious thinking and slowly align ourselves to the vastness of the outer world as constructive, content, dharmic beings. What is the process of revealing the wholeness within our Self and ultimately discovering the essential oneness behind the different manifestations of piṇḍāṇḍa (the Self) and brahmāṇḍa (the Universe)? By first knowing how it should be recognized. 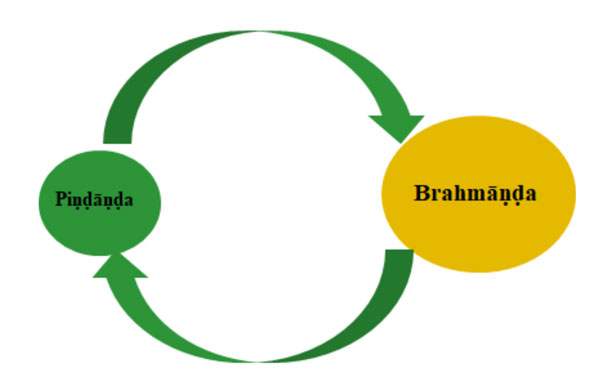 In order to align with the brahmāṇḍa we have to begin from within, by bringing our attention towards the presence of the “all knowing” consciousness within us with the help of meditation practices. As we start to associate with this consciousness, we can experience gradual detachment from external stimulators of our Indriyas (sense organs).

Upon recognizing the real nature of the self, we become wonderfully comfortable in ourselves. Then, we do not look for external validation or support and it becomes easier to discharge our duties with no strings attached. Since such a recognition fully embraces brahmāṇḍa, pursuing action with this attitude is called “karma yoga”. It elevates those actions freeing the person from the stranglehold of endless rounds of cause and effect – karma.

When this inner connection with wholeness is established, we become ready to embrace the outer world without being engulfed in it. Even though we embrace the world, still, we are not intrinsically impacted by it. We cross the ocean of the world without getting ourselves wet.

We each have been given roles to play at a given moment of time. To live our best life is to give our 100% to these roles, however big or small they are in the scheme of things. Whether it is running a corporation of 100,000 employees or managing a household. The dedication and sincerity with which we approach our roles is directly proportional to the happiness and satisfaction we derive from them as we stand free and clear even in the midst of them.

Fight for the sake of duty, treating alike happiness and distress, loss and gain, victory and defeat. Fulfilling your responsibility in this way, you will never incur adverse results.

Once a person transforms into a karma yogi then he/she is fit for recognizing what is beyond all individual karmas as well as what transcends the universal platform in which they reside. Since both the microcosm and the macrocosm still fall within the set-up of limited space and time, the karma yogi must move past this framework to the Absolute-Limitless-Infinite Reality in which both individual and world are put in their proper perspectives.

That connection which was forged through karma yoga now gives way to pure indivisible Oneness. Just as the microcosmic wave first recognizes that it is not apart from the macrocosmic ocean and then ultimately realizes that both it and the ocean are none other than One water.

This inner and outer transformation leads to a fundamental shift in how we relate with others and how we perceive the world itself. We will start to see more sameness/commonality than differences, we will view others with compassion not judgement because we can better appreciate what they are dealing with. We become like a refreshing spring that quietly brings joy and hope to others.

In essence the brahmāṇḍa oversees and supports the piṇḍāṇḍa story and the piṇḍāṇḍa makes an effort to elevate itself to be in harmony with the brahmāṇḍa – In order to ultimately discover the overall Oneness of both and in that discovery we thereby complete the circle of life. 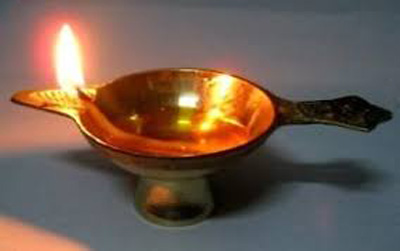 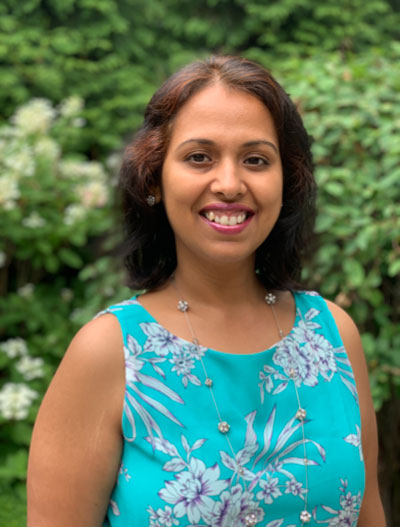 Pooja started training in Jyotiṣa in 2017, at the Arsha Vidya Gurukulam in Saylorsburg, PA under the able tutelage of Penny Farrow.

Since then she has dedicated herself to not only learning and practicing Jyotisha but, assisting in Penny’s classes, speaking at spiritual gatherings and writing articles about Jyotiṣa. She considers herself a humble torch bearer for carrying forward this ancient knowledge in its most intact and pure form.

After completing her BE from India, Pooja moved to University of California, Berkeley to pursue an MS degree. After working as an engineering consultant for a few years, she pursued an MBA from University of Maryland and became a corporate finance professional. Pooja currently lives in Solon, OH with her husband and two daughters.